By Dr. Nina AndersonNovember 12, 2015Uncategorized
No Comments
re-blogged from the guardian,
Norway has been named the most prosperous country in the world for the sixth year in a row and European countries dominate the top 30 of the annual Prosperity Index.  What is a Prosperity Index?  According to Saian Hansen, Executive Director from the Legatum Institute who published the rankings,

"The Prosperity Index tells us that the story of human progress goes beyond economics. It tells us that for nations to flourish they must provide opportunity and freedom to their citizens. It shows how access to quality healthcare and education provide the foundations on which nations can grow.  It proves that effective and transparent government empowers citizens to take control of their lives. And it shows that protection from violence and oppression, as well as strong social bonds, are crucial to a thriving society."     Simply stated, the Prosperity Index studies the overall economic health and well-being of a nation besides looking at indicators such as a country's GDP (Gross Domestic Product).   The GDP measures the economic performance of a country based on output and productivity.  In a broader context, the economic health or the holistic health are Comprehensive  Holistic Indicators of a country or an individual's overall wellbeing- sounds a lot like TOVA's mission.  Prosperity is about more than Money.     The Index assesses 142 countries and looks at 89 individual variables across eight sub-indices: economy, entrepreneurship and opportunity, governance, education, personal freedom, health, safety and security and social capital. 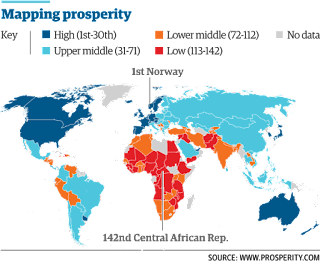 Norway has been named the most prosperous country in the world for the sixth year in a row by a global prosperity ranking, which rates countries on how they perform in areas such as economics, health, education and freedom. What makes Norway one most prosperous country in the world?  Norway's high incomes coupled with social freedom, political stability, excellent healthcare, education and other social benefits aim to provide safe and secure environment for people to live and go about their daily lives.
European countries dominate the top 30 of the Prosperity Index, while the UK has jumped three places on last year’s rankings and has been named the most prosperous of all the major EU countries in 2014. It has been placed above Germany at 14th and France at 21st place.  It also warns that the US is “no longer perceived to be the ‘land of the free’” and is placed 21st for the personal freedom, below countries such as Uruguay and Costa Rica. Following Norway in second place on the overall rankings is Switzerland. New Zealand, which is placed third, is the highest climber of the latest release with its jump up attributed to its economic resurgence.  Almost two thirds of the countries listed in the top 30 are European nations, with 6 of these being EU member states.


Click on for the complete report,
http://www.theguardian.com/news/datablog/2014/nov/03/european-countries-dominate-in-global-prosperity-rankings?CMP=share_btn_link
﻿
Be Well and Prosper, Dr. Anderson
﻿