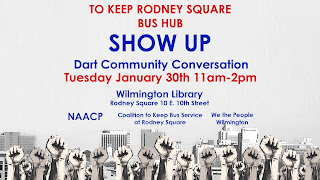 Although I was unable to make the Rodney Square meeting, I am impressed with this millennial who understands to root causes of poverty. Delaware is well on its way to becoming a ‘Corporate Plutocratic State’ which will continue to consolidate wealth, decision-making and power. Sadly, those few people who sat in the board room to make this decision most likely have never had the experience of riding DART nor grasp the importance of a central & convenient hub for transfers. I am not a thug nor a drug-dealer and have appreciated DART's service and having access to public transportation. Most of us are just 1-2 paychecks away from homelessness and  the societal symptoms of poverty.  I Simply Say.. Soldier On & fight the Good                                                                                                      Fight!                                                                                                                                                                              All the best, Dr. Nina
“This is all about standing up to bullies and fighting back against big business and corporate interests. I saw Governor Carney THURSDAY at LOMA and we had an impromptu meeting. I said excuse me and I told him that people are really unhappy about his Rodney Square decision. He told me they should have been at the meetings. How could an entire community of people fit into his office? Then he told me how he used to ride the bus to Dover when he was working for Senator Biden and how back then Rodney Square was just for working class people. This implied that the homeless and unemployed are not welcomed in center city. Another troubling thing he said was that Rodney Square had become a "Drug Market" and I said to him that the problem of drug abuse is a much larger issue than Rodney Square. This decision to move specific bus stops away from the square will not solve the problem of dangerous drugs and addiction. Finally he said there have been "Two murders" at Rodney Square. I said the thousands of people traveling through Rodney Square every day are not all murderers and drug-dealers. They are mothers, teachers, veterans, nurses, students and retired people trying to get to Doctor's visits. They are handicapped people who have to get around from place to place in a way that is convenient for them. And yes, they're homeless people who have been abused by society trying to get to mental-health evaluations to figure out their issues.
Crime and individuals being seen as "criminals" are the real reason why this decision was made. This is reality despite everything the state says publicly about traffic congestion. Certain bus riders are not welcome anymore.
The rerouting of the buses has dug large trenches between communities. A bomb has been dropped on the relationship between the bus riders and the state. There are now bus routes which have no reasonable connection for the elderly and handicapped. For these people it is impossible to walk blocks to transfer in time to catch the next bus. Not only do they have to walk and wheel-chair long distances- they miss the next bus in the time it takes for them to get there and then they have to wait another hour in the cold for the next bus to come. The buses are always off-schedule so riders don't know what time the next one is coming which makes the wait even more maddening. That wait is like the wait for justice. It takes a patience beyond understanding to get through... These are ELDERLY people and pregnant women waiting in the cold with no shelter over head at the majority of these new stops. And where there are shelters there are no benches to sit on after those long walks they suffer through. Two years ago two bus shelters were removed from Rodney Square along with many benches to deter the homeless from loitering.
I have heard stories from grandmothers who have not made it to doctors appointments. I have heard from fathers trying to get to work that were late and were fired. I heard from a student in law school who had to drop classes. Her story was written about in the News Journal. I heard from a local small business owner that her business now has a large amount of people at the bus stop in front of their front door. The riders waiting in the cold used to catch the bus at Rodney Square. This business owner who has been in the community for over 30 years has some of the same complaints that the big businesses around Rodney Square like Chemours/Dupont, the banks and the law firm (Young-Conaway) have had in recent years. "The riders waiting litter". "There are arguments and smoking: possibly drugs". "The large crowd deters clients from entering my business". And "It's not safe". Unattended children play on the steps. No one from DART or Down-Town Visions cleans up trash or shovels snow or salts the sidewalk in front. There is no police presence at this business like there still is at Rodney Square even though there are far less people at Rodney Square since this negative change occurred. I have heard from an army of people telling me they've had to march from one bus stop to another to catch their bus. They don't know which way to go and this makes no sense to any of them.
And to that I say discrimination doesn't make sense to me either. It is hard: it's hard to deal with and it's hard to understand and I'm tired of it too. I'm not used to it. We can't get used to it. We gotta fight back against it. We need to protest at Rodney Square since the government and business interests do not want certain individuals at the square. We need to FIGHT to go back to the square! People are being hurt because government officials put money from Real Estate developers over compassion for the people and it's NOT OK!”
A voice of a Millennial Social Justice Advocate