Head of her class and Homeless

By Dr. Nina AndersonOctober 19, 2014Uncategorized
No Comments
Re-blogged from NPR, At The Head Of Her Class, And Homeless

Amazed and truly inspired by this young leader, Rashema Melson who graduated from high school and valedictorian (4.0 GPA) of her class despite being homeless. More remarkably, Rashema did not hide her family’s situation from her friends and schoolmates but did not offer up the sharing. Rashema states, “ I don’t like sharing with kids because they start to pity you or they start to look at you in a different way.” No pity here-just resilience and tenacity to pursue a goal to become a Forensic Psychologist.

According to the National Law Center on Homelessness and Poverty

-Number of families who are lodging nightly in city shelters in New York City 6,252

-Annual number of food stamp recipients who are children 9,300,000

-Percent of homeless that have problems with alcohol, drug abuse, or mental illness 66 %

-Percent of homeless persons that have been sexually assaulted 7 %

-Percent of homeless women claim to have been abused within the past year. 25 %

-Percent of homeless population that are Veterans / Vets 40 %

-Percent of homeless persons who are employed 25 %

On Wednesday, Rashema Melson will graduate at the top of her class as the valedictorian of Anacostia High School in Washington, D.C. She's headed to Georgetown University this fall on a full scholarship. Even Melson isn't sure how she's managed to successfully juggle school (a 4.0 GPA), athletics (cross-country, track, volleyball) and homelessness. "I just know when I have a goal, I try not to let anything get in the way," she says. 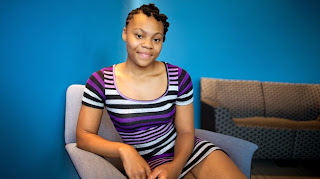 "I would just say keep your head up because you never know what's going to happen," she says. "You just have to have hope and faith and don't let it change who you are. Don't become ashamed and don't be embarrassed. And just know who you are inside. Because you live in a shelter — that's not who you are, that's just where you reside at for the moment."

She says it's the best advice she can give; it's what she tells herself. Rashema Melson lives in the D.C. General homeless shelter with her mother and two brothers. "Because you live in a shelter — that's not who you are, that's just where you reside at for the moment," she says.

All the best Rashema. The future for you looks very bright as your pursue a degree in Forensic Psychology!