Ebola, Ebola, Ebola is been heavily broadcasted in the news and media over the last several weeks. The first case of Ebola was confirmed on September 30, 2014 from a traveler leaving West Africa to Texas. The person developed symptoms of the virus after 5-days of arriving in the U.S. The Center of Disease Control (CDC) has up-to-date information about the virus and provides question and answers for both the public and travelers alike (www.cdc.gov/vhf/ebola).

Ebola, previously known as Ebola hemorrhagic fever, is a rare and deadly disease caused by infection with one of the Ebola virus strains. Ebola can cause disease in humans and nonhuman primates (monkeys, gorillas, and chimpanzees). Ebola viruses are found in several African countries. Ebola was first discovered in 1976 near the Ebola River in what is now the Democratic Republic of the Congo. Since then, outbreaks have appeared sporadically in Africa.

Transmission:The natural reservoir host of Ebola virus remains unknown. Researchers believe that the virus is animal-borne and that Bats are the most likely reservoir. Ebola is spread through Direct Contact (through broken skin or mucous membranes in, for example, the eyes, nose, or mouth) with: • blood or body fluids (including but not limited to urine, saliva, sweat, feces, vomit, breast milk, and semen) of a person who is sick with Ebola • objects (like needles and syringes) that have been contaminated with the virus • infected animals • Ebola is not spread through the air or by water, or in general, by food.

Symptoms of Ebola include:• Fever (greater than 38.6°C or 101.5°F), severe headache, muscle pain, weakness, vomiting, diarrhea, abdominal (stomach) pain, unexplained hemorrhage (bleeding or bruising). Symptoms may appear anywhere from 2 to 21 days after exposure to Ebola, but the average is 8 to 10 days. Recovery from Ebola depends on good supportive clinical care and the patient’s immune response. 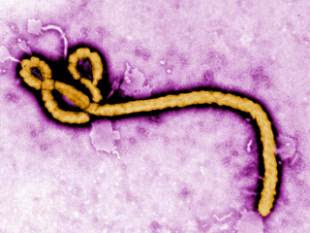